It’s almost that time again when we join forces with 20th Century Flicks, Curzon Clevedon and Watershed to bring you our celebration of classic and restored films in the shape of Cinema Rediscovered Film Festival!

Taking place during the last weekend of July (25 – 28 July 2019) the 4th edition of Cinema Rediscovered explores the invention, innovation and mystery of cinema; diving deep into the legacy of revered filmmakers such as Nic Roeg, Alfred Hitchcock, Robert Bresson and Bristol born Mike Hodges as well as shining a spotlight on lesser known cinematic voices including Maureen Blackwood, Márta Mészáros and Věra Chytilová.

Alongside these great names is a selection of silent film treats included within the Cinema Innovators + Analogue + Archives strands. Cinema Rediscoverd 2019 celebrates cinema innovators, as well as offering projection tours and hands-on opportunities to identify, make up and project 35mm film, culminating in ‘45s & 35s’, an analogue extravaganza and continues its industry focus on Reframing The Archives.

So much to do and see this year; but here is a couple of highlights that we should flag:

A Lost World Made New: Victorian Cinema in VR
Friday 26th July: 13:30 / Waterside 2, Watershed
The bold experimenters at the dawn of the moving-picture revolution were quick to explore the possibilities of the medium and capture the Victorian world on film. In a unique partnership, the BFI National Film Archive has collaborated with Bristol-based design and graphics company BDH to represent Victorian filmmakers’ early experiments with the medium through the new form of VR. The process of digitising and scanning the images brings the viewer into a new exciting relationship with the films and indeed the past.

BFI silent film curator Bryony Dixon is joined by BDH’s John Durrant for a show and tell about the context of the original works, the motivation for wanting to revisit these works in VR and the process of digitisation.

SWS Presents: Silent Women Film Pioneers: Alice Guy-Blaché Screening
With introduction by Pamela Hutchinson + Live piano accompaniment by Meg Morley
Friday 26th July: 14:45 / Watershed
As part of our new series of events within our Silent Women Film Pioneers strand we are thrilled to launch the next set of events at this year’s Cinema Rediscovered (25th – 28th July) which highlight some of the key women figures in the early years of filmmaking. For this year we look at the work of Alice Guy-Blaché (1873 – 1968).

One of the first filmmakers to direct a narrative fiction film, and the first known woman filmmaker, Alice Guy-Blaché had a prolific career that spanned more than 25 years.

Starting as a secretary for Gaumont, she eventually became head of film production there until 1907; going on to create the highly successful Solax production company in 1910. By 1912, her rate of film production equalled that of D.W. Griffith, and her films were equally as popular. She wrote and produced more than 700 films throughout her career, making films with Gaumont’s early synchronised sound system, Chronophone, experimenting with special effects, tinting and toning colour processes, and making the first film known to have an all African-American cast, A Fool and His Money (1912).

She was awarded France’s Legion d’honneur, and became recognised by film historians including Jean Mitry and Charles Ford. She spent her later life tirelessly trying to recover her lost films, and has been the subject of several writings and a documentary. Cinema Rediscovered is proud to bring a selection of her inspiring works to the big screen once again, including Matrimony’s Speed Limit (1913), Burstup Holmes Murder Case (1913) and Ocean Waif (1916). 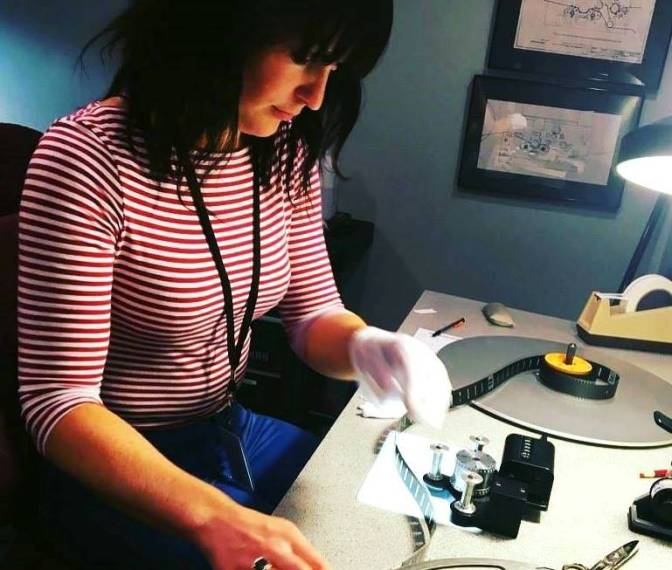 Journey into the Archive: Rosie Taylor
Saturday 27th July 12:30: Waterside 2 / Watershed
Join Film and Media Archivist, Historian and South West Silents Co-Director Rosie Taylor for a Lunchtime Talk about her passion for film and her journey into the BFI National Film Archive. Find out how she got there and some of the things she’s learnt along the way. It’s a rare chance to get such a personal insight into the world of archiving and conservation from someone that’s found her dream job.

You’ll also have an opportunity to get your hands on film stock and pick up practical tips such as how you might go about identifying a film print and there’ll of course be plenty of opportunities to ask questions.

If you want to get even more hands-on with film, drop by the Analogue Room where you can have a go at making up and projecting a 35mm film with a little help from Graeme Hogg, Artist and Co-founder of the Cube Cinema. Graeme will also host is own talk later day with The Invisible Machine.

Robert Who? Rediscovering Britain’s Forgotten Film Pioneer
Sunday 28th July 13:30: Waterside 2 / Watershed
If you’ve never heard of Robert Paul, don’t worry. Surprisingly few people, even among film fanatics, know much about him. Yet more than anyone, he was responsible for launching cinema in Britain, back in the 1890s. Not just ‘moving pictures’ – many pioneers contributed to their invention, including Bristol’s very own William Friese-Greene.

But Paul didn’t only make and sell the first equipment and films in Britain, he also supplied half the world, and built the first studio in 1898. He realised film had to move on from just showing things moving. ‘The capacity of animated pictures for producing Breathless Sensation, Laughter and Tears has hardly been realised’, his advertisement claimed for what the studio had been producing that Autumn, and he went on to create much of what we still take for granted in movies. So why isn’t he known alongside names like Lumière and Edison?

Join renowned British film scholar Professor Ian Christie for an illustrated talk unpacking the hidden history of Paul’s neglect, arguing that his pioneering example should be recognised today to inspire us in this age of digital media, and for a chance to see some his surviving works. To celebrate Paul’s 150th birthday, Christie has also produced a graphic novel, Time Traveller: Robert Paul and the Invention of Cinema which will be on sale at the event.

Victorian Film Inventor: Friese-Greene
Sun 28 July 17:30: Waterside 2 / Watershed
How on earth did Willie Greene, a working-class kid from Bristol, become William Friese-Greene, the first person to present a movie camera to the world? And how is it possible that he died an unknown pauper in 1921, was considered important enough to have an all-star movie made about him thirty years later – The Magic Box, but since then has been completely ignored by film historians?

Film director Peter Domankiewicz became fascinated by the Friese-Greene story whilst living in Bristol in the 1990s and has undertaken the most substantial research to date, to untangle the real person from this mass of contradictions. In this talk, he will trace how Friese-Greene’s photographic skill and self-confidence helped him found a successful chain of studios and led to collaborating with John Rudge in Bath to bring moving photographs to the magic lantern, before making the leap to the world of the learned societies of London and the possibilities of capturing life on a strip of film.

Always looking to the future, he also championed the role of women within photography. He would go on to create some of the earliest colour film systems, leading to his son Claude capturing 1920s Britain in colour in “The Open Road”.

So those are our highlights for this year’s Cinema Rediscovered Film Festival. Plenty of more cinematic delights can be found within the festival’s programme so do come and join us for another wonderful weekend of filmic fun!

View all posts by James Harrison