“Didn’t you review Man with a Movie Camera six months ago?”

You can get a funny sense of déjà vu in the bubble that is silent film fandom, and not just from the many recycled love triangle plots or unerringly similar heroics we see in film to film. In the growing market for silent film restorations on blu-ray the field is starting to get crowded with some of the safer classics getting multiple releases from different labels. Thankfully the publishers are no slouches in trying to make every new release stand out from the rest, and while there is a lot of crossover, this competition is bringing wholly new material to light. Context is king, and this new release of Man with a Movie Camera from the Masters of Cinema (MOC) label pays due deference to giving viewers every conceivable in-road to learning about and understanding the visual mastery of Dziga Vertov.

The sources available to blu-ray publishers are also vital, and this latest release is remarkable for presenting what is unquestionably an absolutely stunning restoration of the film. Cinemagoers will recognise it as the print restored by the Dutch EYE film museum and toured around UK cinemas last autumn by the BFI, and the clear image presented here is pristine to the point of looking like it was printed yesterday. Talking to audience members in Bristol I met more than a few who had never imagined that a silent film could look so new, not just in Vertov’s dazzling visuals, but also in the quality of the print itself. In many ways this exemplary print will have some reconsidering film heritage completely, and this home video release will only go on further this reappraisal.

Confusingly the blu-ray released by the BFI last August used a different print to EYE authored restoration we are able to view at home with this MOC release, and in side-by-side comparison it’s the newest edition which stands out by quite some margin. Yet having heard others casually label the BFI print as now being redundant in comparison, I feel a case has to be made that the experience of a silent film is fundamentally determined by much more than just the quality of the print. The BFI version certainly shows its age (and that in itself can be valuable), and the MOC/EYE release is pristine, your appreciation as viewer hinges so much more on the musical accompaniment. In blunt terms, I’d rather watch the worst print in the world with the best musical accompaniment conceivable, rather than have it the other way around.

As it so happens the BFI vs MOC choice is not that divided, but my advice to the consumer would be to seek out a sample of each respective score and to try on each for size. Some will absolutely adore the Alloy Orchestra accompaniment on the MOC release, but having seen it twice with an audience I know that it easily divides opinion, especially in their jarring use of fire-engine noises and the like to sync up with the action in the film. Personally I had some reservations about the Michael Nyman score which accompanied the BFI blu-ray, released last August, but his 12 piece chamber orchestration will suit some much better than the honking car horns and crashing cymbals of Alloy Orchestra on this new release. Either ways, the glory of a new restoration will be completely lost if the score sticks in your ear throughout, so do compare and contrast!

These instrumental differences aside, this MOC release does overlap the BFI edition in some regards, while also importantly outshining it in others. Both editions come with two extra films by Vertoz, the first being an hour long early-sound dirge (no really, an actual dirge) called The Three Songs of Lenin, as well as an edition of formalist silent newsreel programme Kino Pravda #21. What is new on the MOC release is two feature length Vertov titles, one early talkie called Enthusiasms: Symphony of the Donbass, and a silent documentary essay of sorts called Kino Eye/The Life Unexpected. Neither are outstanding, but they do provide interesting bookends to the work Man with a Movie Camera itself, showing the work the director did before and after his master work. Donbass in particular, with its use of sound is interesting, not as effective and pure as the main title of this release, but an interesting expansion of the theories Vertov espoused.

To that point this release is also beautifully matched up with a 100 page booklet stuffed with excerpts and extracts from the diverse writings of polemic filmmaker and theoretician. While Man with a Movie Camera obviously stands alone, viewing it in isolation is almost to do Vertov a disservice considering how he so carefully pitched it as the moving embodiment of his theories of seeing the world unmediated, catching the life unawares, and the need to present cinema as truth. To be given a book of ‘required reading’ with your film viewing might feel a touch collegiate, but again this new release from MOC other extras which can give viewers a new in-road into understanding the film. The first is a commentary track by Australian critic and scholar Adrian Martin, who lucidly and cogently offers a lecture of sorts on the filmmaker and the film. Not concerned with closer readings of the visuals on screen, Martin digs into the theories and delayed influence Vertov had on successive generations of key filmmakers, well above and beyond documentary film per se. Alongside this we also get a 45 minute filmed chat with British scholar Ian Christie, where he tackles the challenges of working backwards through Vertov’s work when the universal starting point seems to be Man with a Movie Camera. The director needs to be understood beyond the impact of this one canonical film, and Christies reflections give the viewer a handle to help grasp Vertov’s sound work. 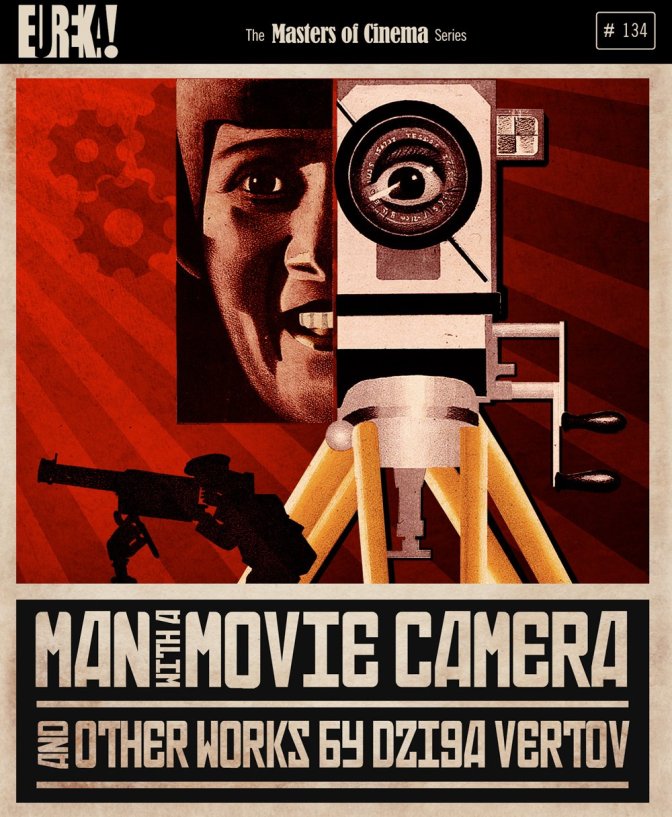 Finally and most brilliant however is David Cairns dynamic visual essay Dziga Vertov: Non-Fiction Film Thing, which at a punchy 20 minutes gives a whistlestop exploration into the work and visual tics of the Soviet filmmaker. In a tone which is recognisable from his blog Shadowplay, Cairns brings his insightful and irreverent perspective to bear on a filmmaking polemicist who tried but didn’t always succeed in practicing what he preached. A counterpoint to academic and historic readings offered elsewhere in this release, Cairns visually quotes broadly across Vertov’s filmography and stirred this viewer into wanting to re-view and re-assess even more of Vertov’s work. Sadly I doubt were likely to see much more in the way of Vertov blu-ray releases in the foreseeable future, but in this release Master of Cinema are to be commended for ample material and plenty of critical context for the viewer to really get stuck into.

Those interested in acquiring this fine release can take themselves over to the Masters of Cinema shop to order their copy of Man With  Movie Camera today!